The association for vocal and chamber music Laetitia was established in the 80's since it was necessary to create legal, organizational and economic background for the activity of the choir itself and also for the extension of spiritual, ethic and artistic values, which the music cultivated by Laetitia offers. The association with its present president Zuzana Liberková (alto singer) is a guarantor of the choir's concert activity in the whole of the Czech Republic and abroad (Slovakia, Poland, Austria, Germany, Sweden). It mediates the cooperation of the choir and instrumental musicians and ensembles, authorities of national and local administrations and cultural institutions. Most of its struggle is dedicated to the development of mutual Czech-German-Austrian activities of young people in the field of sacred music in the Euroregion Šumava – Bavorský les. Every year since 1997, a musical meeting of amateur choirs from the Czech republic and abroad called Šumava - Sacred Music has taken place owing to an extensive co-operation with many national, municipal and church authorities. The concerts of this festival take place in many towns throughout the region, the town Kašperské Hory is considered its centre. In this town, the Laetitia Association, in cooperation with the local Roman-Catholic parochial office and Muzeum Šumavy (Museum of Šumava), produced a work centre for sacred music, which can be used all throughout the year not only by Laetitia itself, but also other co-operating musicians and choirs. 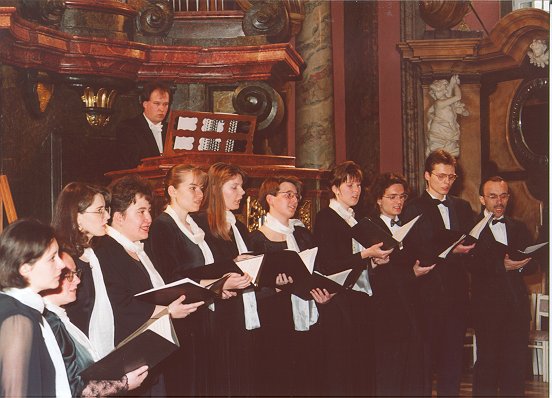 The beginning of the Laetitia choir goes back to the foundation of the mixed chamber choir in 1976. The Czech singer and singing educationalist Dagmar Součková and the choir conductor Jindra Jindáčková originally established the choir. In the mid-eighties, Stanislav Mistr became the choir conductor of Laetitia and was finally replaced by Roman Michálek in 1992. Right from the beginning, the chorus singers have consisted of students and graduates of Prague universities from various different fields - technicians, mathematicians, geologists, economists, lawyers, historians and educationalists - all in all usually around 16 members.

This cooperation results in the choir's repertoire and its sound qualities. The choir performs not only sacred works, but also secular works of all times and styles of European music, ranging from the Gregorian chant , vocal polyphony and classical works of choir literature to adaptations of traditional songs and compositions of contemporary composers. Systematic development of singing culture of particular voice groups is already considered to be a traditional characteristic feature of the choir's work. Thanks to this, the choir has a tender and cultured sound and is able to perform not only as the unit (mixed choir), but also as an individual men's choir (for instance, Bohuslav Martinů: Hora tří světel) or a women's choir (G. B. Pergolesi: Sabat mater); also, if needed, it can create soloists ensembles of various cast and master soloists parts of its repertoire mostly with their own forces. 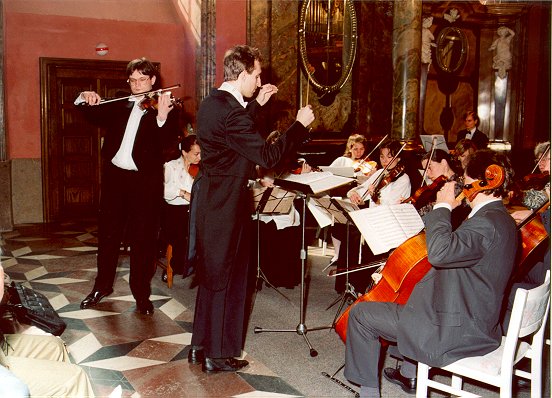 The chamber choir for strings Musica Academica has gradually become a steady partner of the Laetitia choir, similarly as Laetitia Ensemble of Prague university students conducted by Roman Michálek. (The artistic guarantor of the orchestra is Jiří Portych, professor of the Conservatoire in Prague.) The orchestra makes its appearance together with the choir, but also with its own programme, which mostly consists of compositions of the baroque and classicist period. In accordance with its needs, the orchestra co-operates with professional soloists, especially young musicians. Ing. Jana Faitová is the maestro of the orchestra.

Laetitia performs at liturgies in churches, organizes independent concerts (in churches and elsewhere), takes part in choir competitions, displays and festivals. On invitation of Český rozhlas (the Czech Radio), Laetitia performed in the project of the radio station Vltava named "Koncerty ze studia 1". Performances given by Laetitia are often monothematic (Saint Wenceslas, Advent, Passion, etc.), they bring collective performances of rather extensive composition cycles (A.V.Michna z Otradovic: Loutna česká, P.Eben: Cantica Comeniana, etc.) and cyclic compositions (mass compositions and oratories), and also mixed performances of vocal and instrumental musical display together with spoken word and contingent implications of scenic performance. The co-operation between the choir and the chamber orchestra as well as the many-sided co-operation of Laetitia with many other instrumentalists enables them to use in these programmes compositions assigned for various cast (choir and cappella or the accompaniment of organ, piano, other accompanying instruments or chamber orchestra as well as independent instrumental performances).

Two young graduates of the Pedagogical Faculty of the Charles University in Prague – Roman Michálek and Tereza Bystřická engage in organization, dramatic guidance, singing preparation, repertoire studying in the present. 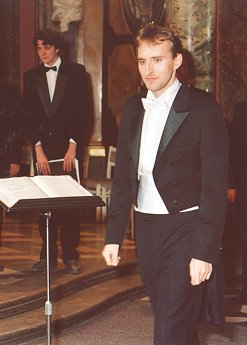 Mgr. Roman Michálek (1971), choir conductor and conductor since 1992. He gained conduction experience first in the choir Česká píseň in Pilsen. Simultaneously with the managing of Laetitia, he founded and manages the Dvořákův komorní sbor (Dvořák's chamber choir) in Kralupy nad Vltavou, conducts the chamber orchestra named Musica Academica and dedicates himself to pedagogical activities. He is, in the first place, interested in vocal sacred music.

Mgr. Tereza Bystřická (1972), vice choir conductor and voice advisor of the choir. She manages the singing training (she is herself one of the soloists of the soprano section in the choir). Apart from her activity in Laetitia, she dedicates herself to children's singing training in several other choirs, especially in the Kűhnův dětský sbor (Kűhn's children's choir) – she is the choir conductor of the preparatory departments.